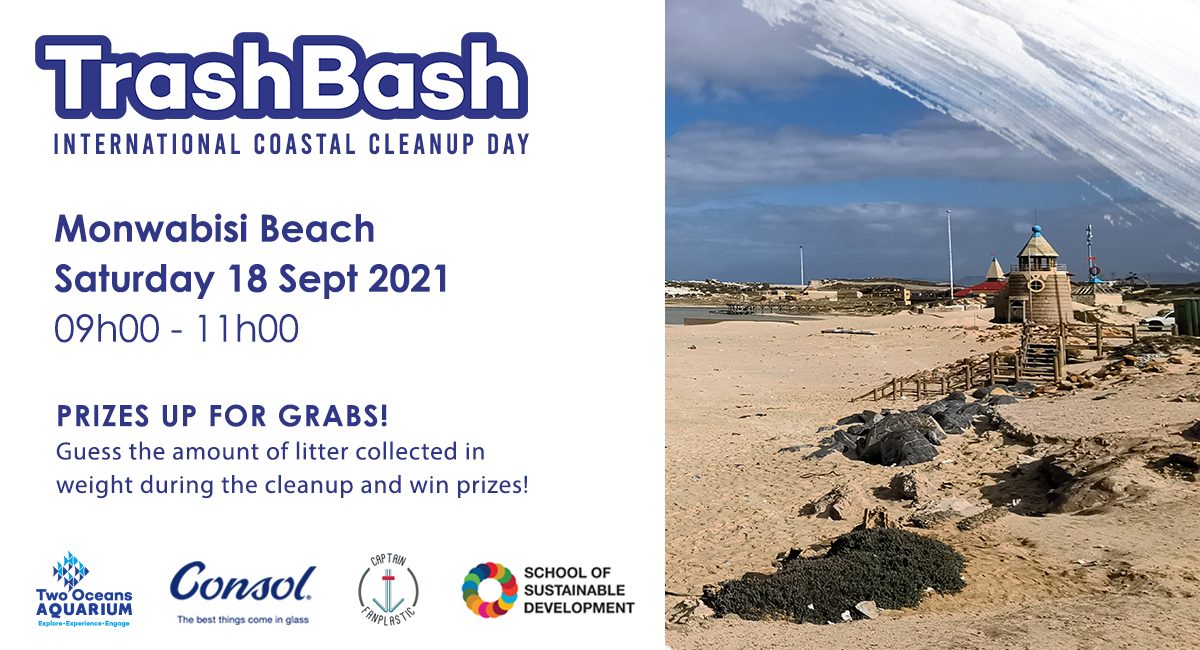 Sunblock, hat, water to drink (in a reusable bottle) and reusable gloves (like the ones you would use in the garden). Please remember to wear your mask in public.

Install: Add the Marine Debris Tracker app on your phone (iOS | Android) to log the litter that is collected (once you have downloaded the app, join The Beach Co-op’s list).

Stand a chance to win prizes by guessing the total weight of the trash collected on the day. The Two Oceans Aquarium, Consol Glass and Captain Fanplastic are offering the three closest estimates a Consol Glass reusable #IChanged2050 bottle, a copy of The Legend of Captain Fanplastic story book, and a Two Oceans Aquarium reusable shopping bag as prizes.

What is International Coastal Cleanup Day?

For more than thirty years, on the third Saturday of September, millions of volunteers around the world gather to clean up beaches, rivers and waterways in their communities. The trash that is collected is documented and weighed and all data is collected in a central database. (To access data from previous cleanups click here: https://oceanconservancy.org/trash-free-seas/international-coastal-cleanup/annual-data-release/ )

What is Trash Bash?

The Two Oceans Aquarium has always supported International Coastal Cleanup Day, however it also organises regular beach cleanups to provide additiional opportunities for people who want to take part in beach cleanups around Cape Town. Since 2018, the Aquarium’s Trash Bash campaign has visited many of Cape Town’s beaches and has had thousands of volunteers spending time to cleanup and record the items found. Trash Bash uses the Dirty Dozen methodology which focuses on 12 items that are often found on beaches. These items, like plastic bags, bottles, straws and sweet wrappers, are all recorded and the data forms part of a scientific study on plastics in the ocean.

At Trash Bash events, participants are divided into working teams where one person is assigned the role of data capturer (using the downloaded app on their phone) and records all of the items that are collected, while the other members of the team are responsible for picking up and identifying the trash. The electronic data, along with the total weight of the trash collected at Trash Bash on 18 September 2021, will be sent on for inclusion in the annual International Coastal Cleanup Day report.

Why do we need to clean the beach?

Estimates are, that by 2050, there will be more plastic in the ocean, by weight, than fish. Our world’s ocean is in dire peril, facing a human-made crisis and we urgently need to turn the tide on plastic and other pollution within the marine environment. Studies have shown that millions of seabirds have ingested plastic and a staggering number of sea animals die each year from either ingesting plastic, or becoming entangled in plastic debris.

Seals are also impacted by plastic ingestion and entanglements. A recent study on entanglement of Cape fur seals (Arctocephalus pusillus pusillus) at colonies in

central Namibia identified 366 cases of entanglement between April 2018 and December 2019. A short video clip here shows the negative impact of plastic pollution on these animals.

Unlike organic materials, plastic does not break down into naturals components. Through exposure to the elements (sun, wind and water), it breaks up into smaller pieces called microplastic. Even when a beach seems completely devoid of litter, taking a closer look, one is very likely to find these tiny bits of plastic everywhere mixed in with the sand. These microplastics end up in the marine environment where they are mistaken for food and consumed by animals as small as microscopic plankton. Humans, being at the top of the food chain, then consume the animals that have eaten plastic, which brings the plastic back onto our plates and into our bodies.

Beach cleanups are vital as they prevent plastic and other trash from being deposited into the ocean. We can all do something to look after the environment, and cleaning a beach is an easy and fun way of making a contribution to, and a connection with, nature. These cleanups also contribute to scientific studies through the data collected.

Cleanups, like Trash Bash and the International Coastal Cleanup Day, are not only good for the environment, they are also important for the people taking part, and the community as a whole. Spending time outside and with like-minded people, creates a sense of responsibility for the environment and brings people together to care for areas within their communities.

“Beach cleanups are also an eye-opener on the amount of litter out there, and help people to make the connection between their shopping choices, the packaging used for the products we consume, and the ocean. We hope that, as a result of spending time on a beach cleanup, people will not only make different choices, but will also start putting pressure on suppliers, producers and manufacturers to change the packaging they use so that it is more environmentally-responsible. Beach cleanups are not only fun outdoor activities, but also educate and hopefully inspire innovations for packaging, recycling, waste management and much more,” said Helen Lockhart, the Two Oceans Aquarium’s Communications & Sustainability Manager.

For more information about the cleanup on 18 September, please visit www.aquarium.co.za or https://fb.me/e/2u9uRlV15

[Cape Town: 11 July 2022] – The V&A Waterfront has reaffirmed its commitment to lessening theimpact of plastics on the environment by signing up to the SA Plastics Pact, as well as hosting a newresearch study with restaurants in the precinct on ways to eliminate harmful plastics.The Plastics Pact aims…

Join Captain Fanplastic and the V&A Waterfront with their Plastic Free July campaign the #Captains5RChallenge. Discover how you can Refuse, Reduce, Reuse, Repurpose and Recycle plastic waste so it does not end up in the ocean.

The Table Bay’s mascot, Oscar, immortalised in aluminium Millions of coffee capsules are used around the world every day as coffee lovers, including guests at The Table Bay hotel in Cape Town, get their caffeine fix. When Joanne Selby, the hotel's general manager, learnt about sculpture artist Godfrey Dambuleni creating…